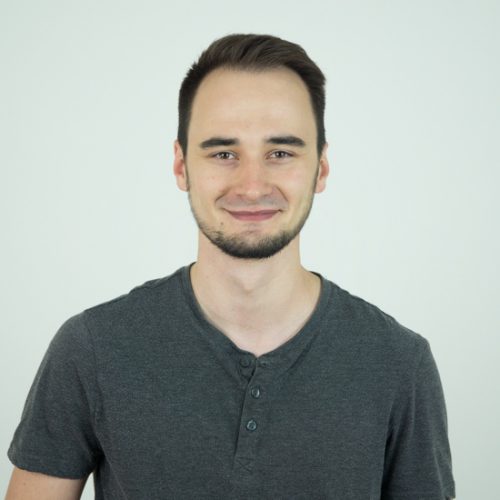 
Hi! I'm Peter, and I am passionate about IT, agile, human resources and company culture. Strange combination? Not anymore. These areas are connected nowadays more than ever.
I coach, lead, fix and also getting fixed. Failure is my daily bread and I'm not ashamed of it. Because as Michael Jordan said "I can accept failure. Everyone fails at something. But I cannot accept not trying." Outside the office and mainly during the weekends you can find me on the floorball pitch with a whistle in my hand since I am also a floorball referee.

BIO
Once you start facing fear, every day a little bit, it starts dying, and you start growing. And suddenly, you become addicted to that growth. Sasha Daygame
Head of IT Development & HR
Feedo.cz
2017 - Present

Feedo offered me the biggest challenge so far. From servant leadership, I moved into the manager role of whole IT Development department, which had around 12 people. Challenge was to get developers back on track with delivery and to set the vision and plan how to get rid of the technical debt, but also not to stop development of features for our customers. I believe that I can say, that my mission was successful. The team started to deliver in the steady pace, whole development process became more transparent and department gain back the trust of the company (Our colleagues finally didn`t feel like we play Counter-Strike all day). I was also in charge of product division for a while, but just until I found and hired Product Owner, that became part of the development department.

In January 2018 there was opened position of HR Manager. I felt that team is on its track and since we didn't have more money in the budget to hire more developers, I decided to fight also for this position based on my previous experiences and interests. I wanted Feedo to became one of the best employers on the market. Beside classic employment law, we focused also on areas like happiness and employer branding. During 2018 Feedo experienced difficult times when we needed to say goodbye to nearly 50 colleagues, but I sincerely hope that we did our best to keep the company competitive and in the right direction to profitability.

There was once this opportunity. So I took it. And the temporary solution has become permanent. I "left the code" to the better programmers, so I could develop my strengths. I started as Scrum Master for one team, then we added next one. Eventually, I became an Agile Coach. I worked with Scrum Master's to develop their skills, watched over the process from the global perspective, coached whole organization and still solve daily issues. After a while, I realized that Agile goes far beyond the Engineering department so I started to work with Human Resources (Or more likely "Human Relations"). I was responsible for hiring and onboarding process of all developers to appropriately complement our teams and I realized that company culture is something, that we should never underestimate. After nearly 4 years in the company, I was facing a hard decision to leave. But I've been offered a greater challenge, so I realized its maybe time to move on.

First fully code oriented full-time job. I used to be a Front-end developer so I wrote a lot of HTML, CSS, Javascript but also PHP code. I loved it, but you sometimes simply know, that this is something you don't want to do for the rest of your life. I was probably too extroverted person. Heureka was already agile company when I started, and that was also the time when I fell in love with it.

My first serious career stage, which allowed me to peek into the corporate world. I wrote a lot of Javascript, created many process diagrams and seek for opportunities to optimize the flow. I'm greatful for this experience, it gave me comparison and solid foundations to build on later in my career.

EXPERIENCE
If you're not failing every now and again, it's a sign you're not doing anything very innovative. Woody Allen
Title: The development of product or how we killed agile
Language: EN/CZ

Perex: 4.2 of Agile Fundamentals has died due to poor implementation and approach in practice. Rapidly interpreted thoughts and opinions on the Agile view of individual members of a development team. Differing as well as consistent opinions on Agile practice in a technology company.

Perex: One of the most important aspects of agile development training is estimating and planning. Yes, these are important, even for agile software development. Although agile is a fluid and iterative process, that doesn't mean that planning doesn't have a place in its programming and project management.
TALKS
With democracy comes responsibility. Let's be responsible. Otherwise, the rules will come. Me :)
Certified ScrumMaster
Scrum Alliance, license n. 000354726
2014 - 2016
Bachelor's degree, Managerial informatics
Czech Technical University in Prague, Faculty of Electrical Engineering
2009 - 2012
EDUCATION
Without data you’re just another person with an opinion. W. Edwards Deming
SOCIAL